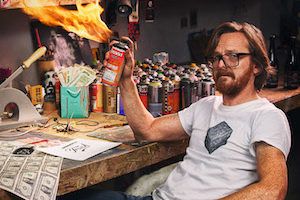 The Dotmasters was born in London in 1972. As an artist, he has participated in many projects and has adopted numerous allies (C6, Media Whore, Leon C6 and more recently Dotmasters). Since his beginnings, he has been involved in studio work, online work and in the street. The latter is for him an “immediate place” whose invasion, disfigurement and appreciation are the ultimate symptom of today’s society.

In 1997, he founded a non-profit arts organization, C6, which while making fun of the art world will become a platform for those working on the margins of traditional art forms. It presents eclectic works that mix graffiti, new technologies and performances in the street, in the galleries and in the nightclubs. The organization will be a relay for his work; collaborations, exhibitions and events being organized and initiated according to one’s own practice. This group of artist-activists ends its activities in 2010.

Close to Banksy, he participates in the Cans Festival organized by the artist in Waterloo and intervenes in his film “Exit through the giftshop”. He also collaborated with Martin Scorsese on the film “Tomorrow” shot in London in 2014. He has also been a driving force of the Nuart festival in Norway for several years.

He keeps in his solo career some highlights of C6: the hybridization of genres and techniques, interest in technology and taste of political commentary. While actively resisting frequent specialization in the fine arts practice by offering performances, digital works and statues, Dotmasters is known for its photo-realistic stencils. His appetite for this technique comes from a trip to Paris in the early 1980s that made him discover Nemo and Blek Le Rat.

Always in eccentricity, his style is constantly evolving, the artist is constantly looking for new aesthetic forms. He remains faithful to the stencil, however, to an incongruous and irreverent British humor and to certain themes which appear recurrently in his work. His fascination with pop culture, for example, was expressed through the repetitive realization of portraits of public figures, logos, characters, signals and emblems that mark the collective unconscious.

In this sense, some pieces recall the pop’art, a reference that the artist advises however to take lightly. His treatment of the iconography of pop culture is part of a rejection of a dichotomy deemed simplistic between art and marketing. In a similar spirit, the artist has developed a fixation with the waste / trash. His solo exhibition, “Trash n ‘Cash” was a huge success. It tackled themes such as identity, money and materialism.

Dotmasters regularly quizzes on the brands and excesses of the consumer society, while working for orders and large companies. He is as comfortable in hell as he is in paradise, his works are in the depths of London throat cutters and in the penthouse, he collaborates with activists as with luxury brands … For Dotmasters, he tries not to fear the contradictory and to always look for the subversive. There is NO subculture ONLY subversion.