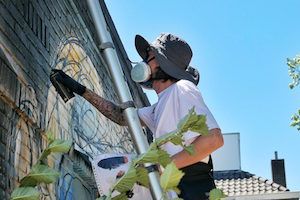 DZIA lives and works in Antwerp in Belgium. Classically trained, he graduated from the Royal Academy of Fine Art of Antwerp in 2002. After several years of being a independent artist, a curator and a graphist, he decided to place his artwork onto walls.

He started portraying wild animals in abandoned or decaying urban areas, reintroducing wilderness, poetry and gentleness in the city. Spontaneous and playful, his work always displays a unique graphic style. The delicacy of his sketches allows him to capture both the expressivity and vulnerability of the creatures, while the swirling lines create an illusion of movement in the animals depicted.

This playfulness also shows in his studio work which explores the possibilities offered by the transparency of the drawing and the support on which it is made, ranging from wooden floors to survival covers and tree trunks. In those smaller pieces and in his drawings, just as in his in-situ work, the animals are rendered with humour and tenderness.
His bestiary has extended around the globe: DZIA has painted walls in many European countries (Germany, United-Kingdom, Italy, Netherlands, Norway, United-States) and was also part of several group exhibitions and a few solo shows. RUN IT will be the first time his work is presented in Paris